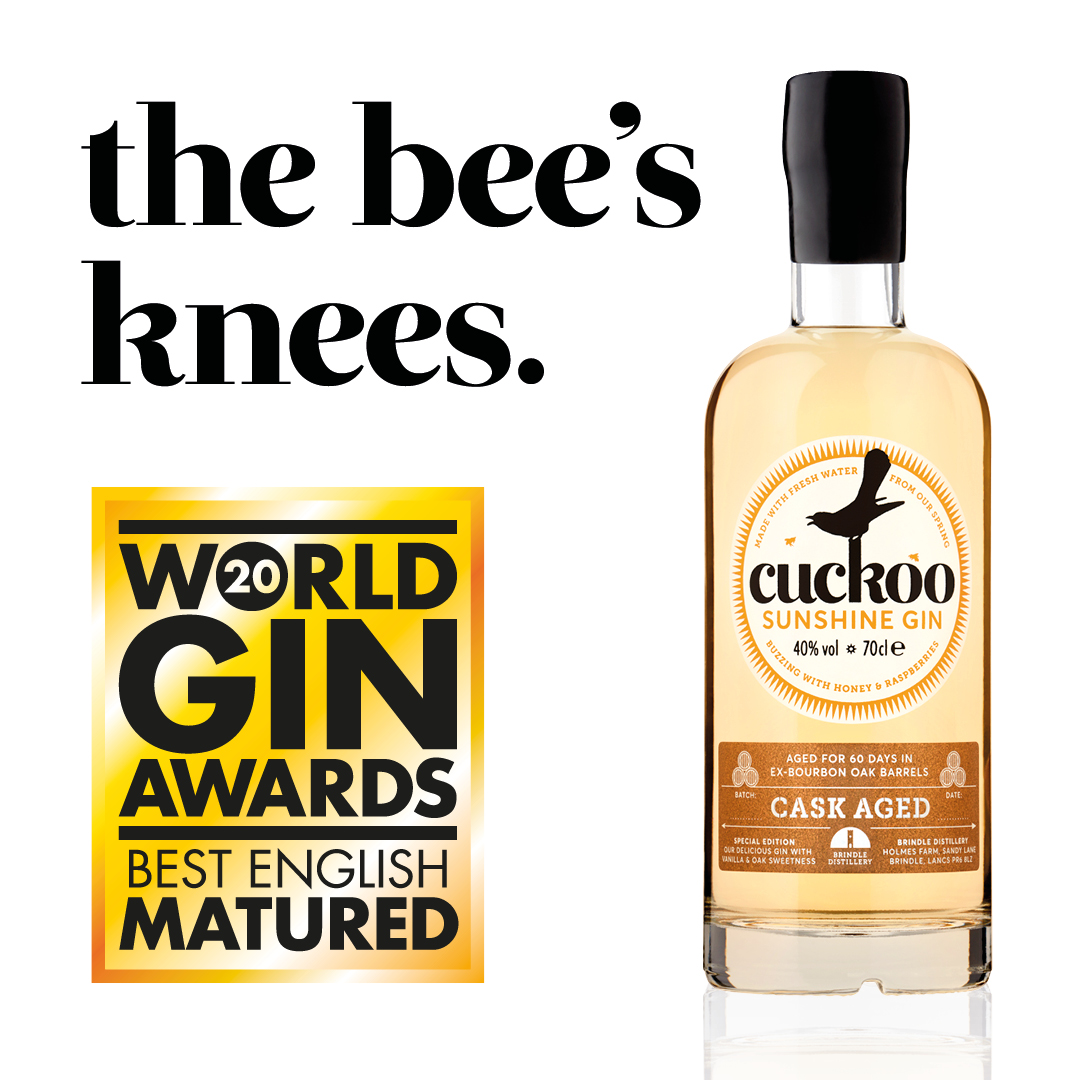 It has been a while since I’ve told you all the inside goings on here at Brindle Distillery! Christmas was really busy for us again so I’ve not been able to sit down and tell you some stories!

We want to start by telling you the good news that we received a prestigious award for one of our creations. Our Cuckoo Sunshine Cask Age Gin won England’s Best Matured Gin at this year World Gin Awards! We are over the moon with this award and what a start to the year for us. We will now be up against the rest of the matured gins in the world where we hope to bring home the Worlds Best Mature Gin!

Secondly, can everyone here at Brindle Distillery please thank everyone for the all the support we received both locally and beyond in 2019. A tough year that was made less tough with you all by our side throughout. So, a big big thank you for your continued support! We love ya.

What to tell you? Quite a bit really. I’ll start with November. I was down in London for a couple of shows mid-November. Two new shows for us. The International Drinks Expo at the ExCel in East London, which can I add, is the most nightmarish place to try and unload your stuff. It was a calamity, would avoid this venue if i could but no doubt we will be back there at some point! Staying in London but more central, the lovely Lindley Hall in Victoria played host to Three Wine Men. The first of two of these shows we attended, the next one a bit closer to home in Manchester. We had another successful jaunt down at the NEC for the BBC Good Food Show in November. We love doing this event, always the biggest and most bust but the most rewarding too! We were joined by Mel & Adrianna, two of our wonderful bar team, for the Saturday and Sunday sessions. First timers at the Good food Show but you wouldn’t have known! Couldn’t have done it without them, amazing team!

December came quickly and before we knew it the shows had dried up and it was time to concentrate on our events at the distillery. Mad Friday was the last Nest night before the new year. Another great night and atmosphere, the Nest reopens on the 25th January! We had a few Tours and Workshops before the big day and a couple in between new year, which we will be doing again this year!

NYE came along and unfortunately for me, I had to miss out as I was hit with the dreaded Christmas bug like a truck! The guys and the people lucky enough to get tickets had a great time as we were joined by the Under the Covers band once more!

Well, January is here now, the longest month of the year (every year we say this but it keeps getting longer!) and we have all come back fit and healthy with our planning heads on. We have spent the first couple of weeks of this year getting ready for the rest of it. Some really exciting things to look forward to this year.

We have added a couple of new experiences at the distillery. Firstly our Supperclub, which we trialled last year and it was a huge success. Good friend of the distillery and the wonderfully talented Maria Grieco, is bringing her Dinner @ Maria’s here to the distillery! We can’t stress enough how good Maria’s food is and, add the ambience of the distillery under the lights, it’s an evening you don’t want to miss out on!

Our newest addition is the aptly named, Gintroduction. We are hosting these before a few of the Nest nights. Come along for an informal but educational look at our distillery and the gins. We will be hosting these in our newly built Snug area and you are invited to stick around for a few jars in the nest afterwards!

Another new addition coming will be our loyalty cards! Yes, we’ve been asked the question many times and we are delivering! Soon you will be able to purchase a card which, after every purchase in the distillery, will dd points onto your loyalty account to be used as rewards! Look out for the release of these soon.

Finally, we have added all Tour and Workshop dates up until the end of this year. Head to the experiences page on the website to book your place on these! After an exceptionally successful year with our distillery experiences, there will be more opportunity this year as we have added more dates than we ever have before! Don’t miss out, get them booked early!

So that’s me until next time. I wont leave it as long I promise! I want to wish you all a happy, healthy and prosperous year. Look after each other and don’t let the b*stards get you down.